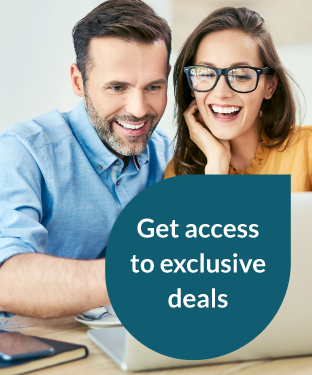 Take $30 off your next order!
The store will not work correctly in the case when cookies are disabled.
COVID-19 NOTICE | DELIVERY DELAYS

Categories: All, Kitchen, Fontaine In Focus 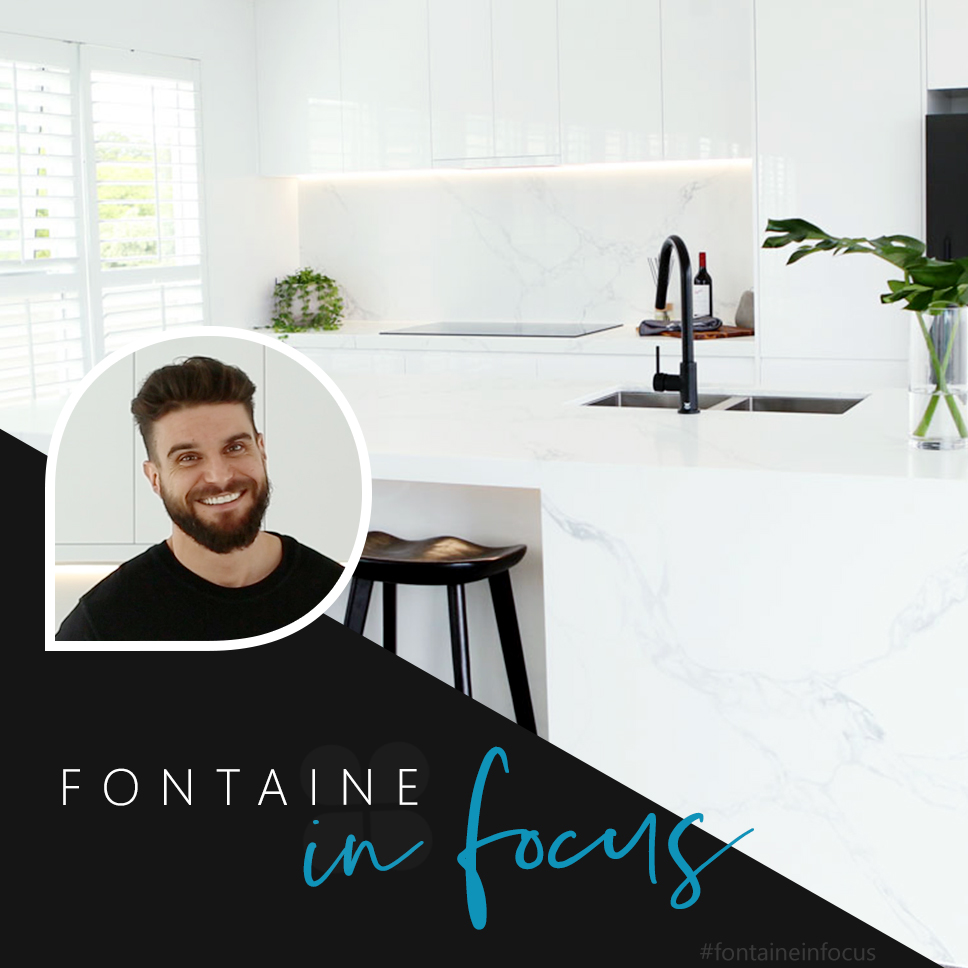 Being a decade old, the place was a little bit dated, a bit old-fashioned and it needed a freshen up.

I purchased the apartment in June 2018 and whilst the place wasn’t in terrible condition, the purpose was to modernise the place, make it my own, and have a space that I feel comfortable in.

The kitchen renovation was my priority, I really wanted to nail the design. Having a background in hospitality I do a fair bit of cooking and I wanted the space to be both functional and modern – I actually enjoy coming home and cooking now!

When it came to inspiration, I didn’t really have anything that struck me in the beginning, I really just wanted something that was clean, modern and fresh. As I started going through it more, and speaking to more people, I also had a lot of help from one of my mate’s wife who gave me a woman’s perspective. I also looked to Houzz for inspiration. 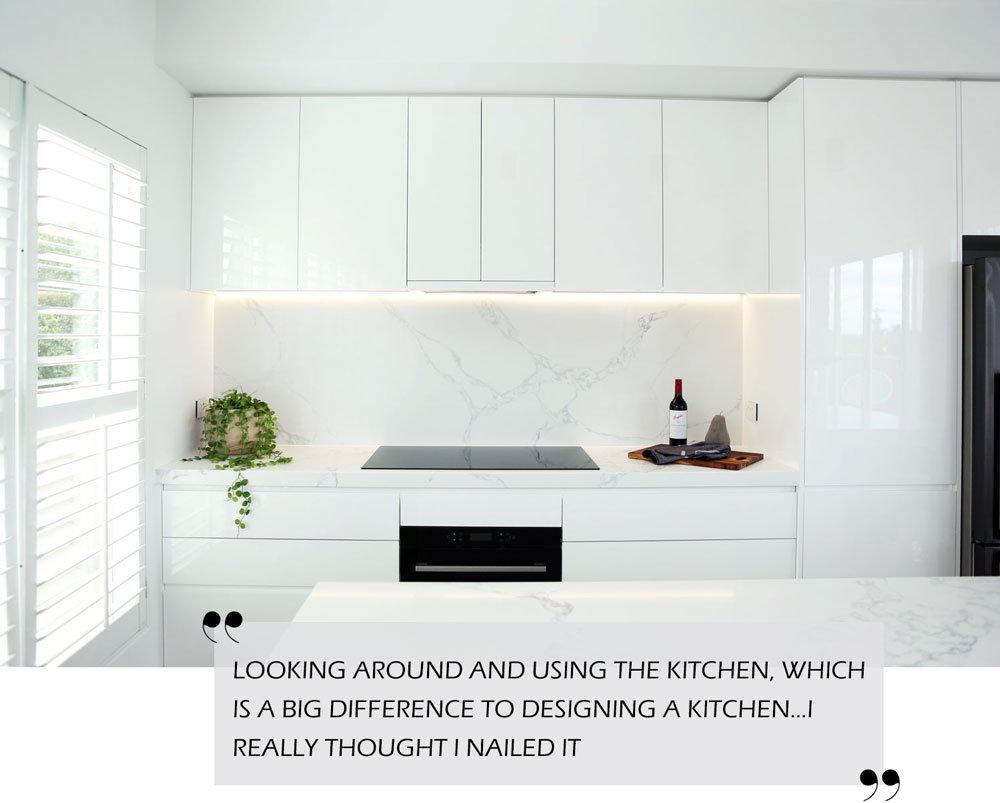 Luckily, I already had a place that I was living in, so there wasn’t a particular time-frame I was working towards. I wanted to move in when the time was right. Although, having said that, there was a heap of problems – a lot of trade related problems – that pushed the renovation longer than I would have liked.

Because I live in an apartment building, one of the things that you need to consider is access to the building during this process. We needed to get a crane in to bring some equipment and materials up, so that delayed that process a little bit. There was also a waterproofing issue that was unexpected – so some strong advice I would give is to expect the unexpected when renovating. 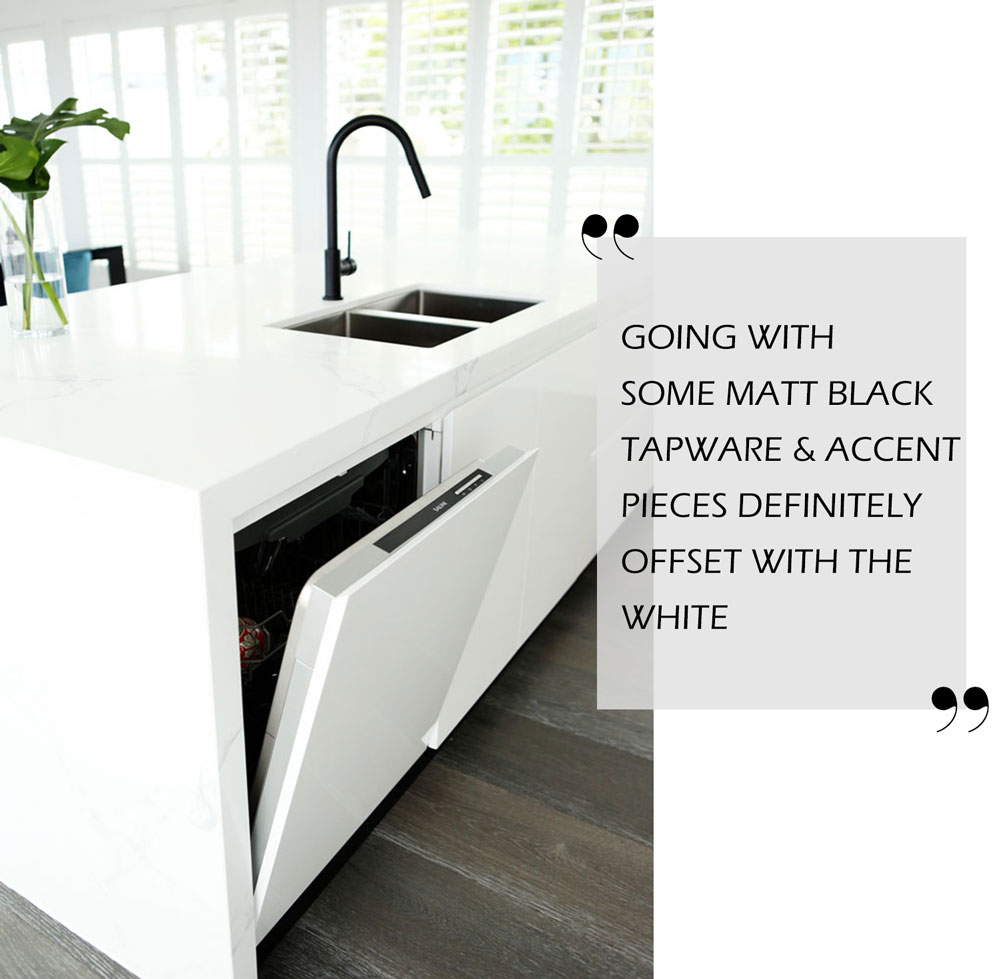 You come across installation problems too. I purchased an integrated dishwasher so my cabinetry would be seamless in my kitchen. The dishwasher door was cut before the install and it wasn’t test-fitted which as a result, I had issues with the door sides. We ended up having to create an infill panel to just butt-up the end of the kitchen with cabinet. At the end of the day it’s an issue that could have been avoided.

Being an electrician definitely helped my renovation process though. Knowing at what stage to bring in my trades, having connections within the industry, and being good with my hands made the process that much easier. I did most of the renovations myself, which I’m pretty proud of.

The kitchen itself dragged on a little because I had some problems with the cabinetry painters who took their time and dragged out the process that extra bit. But I can’t say there was a fail in the kitchen because the result just looks amazing.

I had a casual budget and, due to unforeseen circumstances you do come across when renovating, I blew it out by about 20% but it still came in within a reasonably happy price.

One of the hardest parts in this process was envisioning what the end result would be like. You have this idea of what you want and like but never know if it will come out the way you hope. When you pick a lot of these samples, you’re picking them from a small example and trying to envision that in a big space is hard, so you do the best you can and hope it works out – which in this case it did. 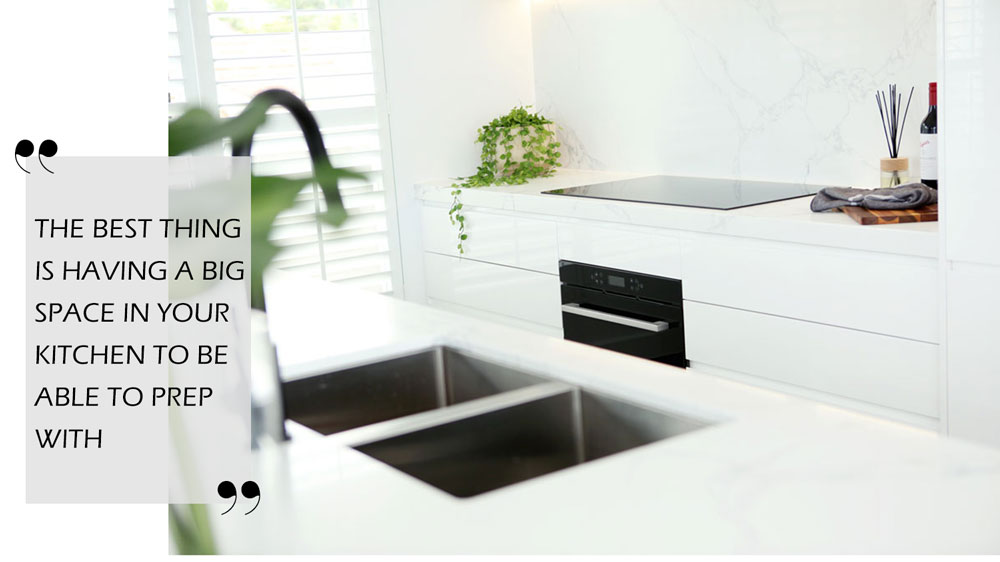 Even choosing your tapware can be daunting. One of the risks I took was choosing matt black tapware and accent pieces in the kitchen, but it definitely offset with the white. But would I change anything? No. Apart from planning out the dishwasher issue a little bit better. 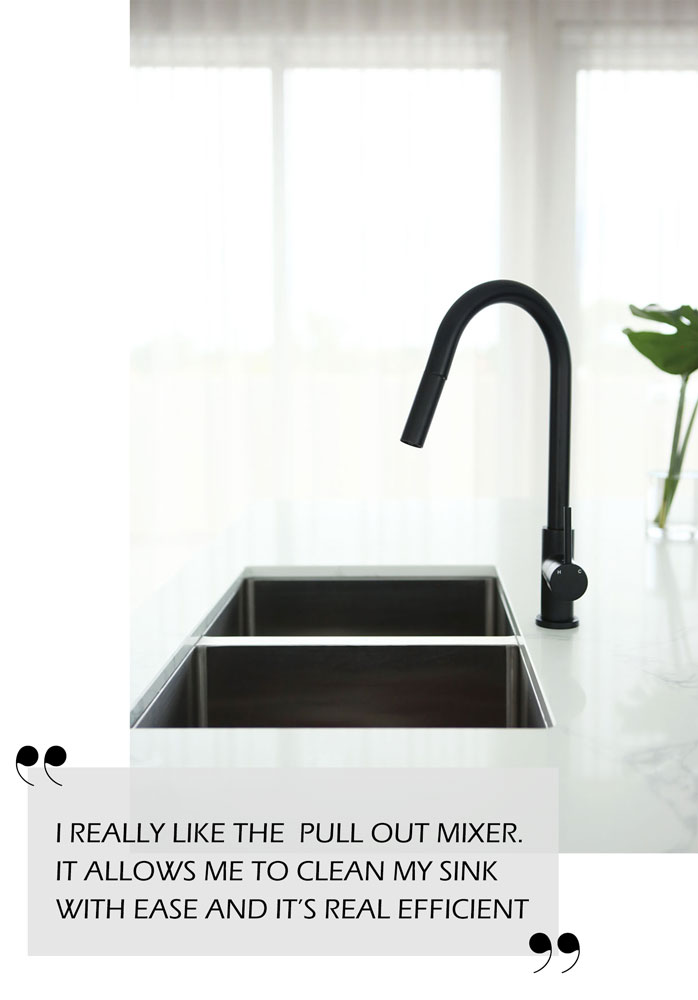 Having said all that, I definitely enjoyed it, the good and the bad, and would love to do it again. I actually enjoyed the process of all the problems that had come up and the solutions is what I love most about it all. Then being able to stand back and look at the colours you’ve chosen, and knowing what went into the process, the outcome just speaks for itself.

The best thing, to me, is having the big bench space in your kitchen to be able to prep on. My favourite part is definitely the stone. The reason behind this stone in particular was that it’s a cool-white stone background to match my vivid white cabinets. Small details like that really add to your kitchen and the overall presence. I can’t go past the integrated dishwasher and pull-out mixer either, I absolutely love them.

I really thought about the appliances that I’d put in my kitchen. I wanted it to be functional and stylish – you go through this big process, so you do want the best of both worlds. The rangehood is a SALINI 600 retractable. I asked my cabinet maker to take off the front infill panel so he could match it to my kitchen cabinets, and he integrated it into the cabinetry. I’m really happy with the outcome. For a budget rangehood, you’d never know. 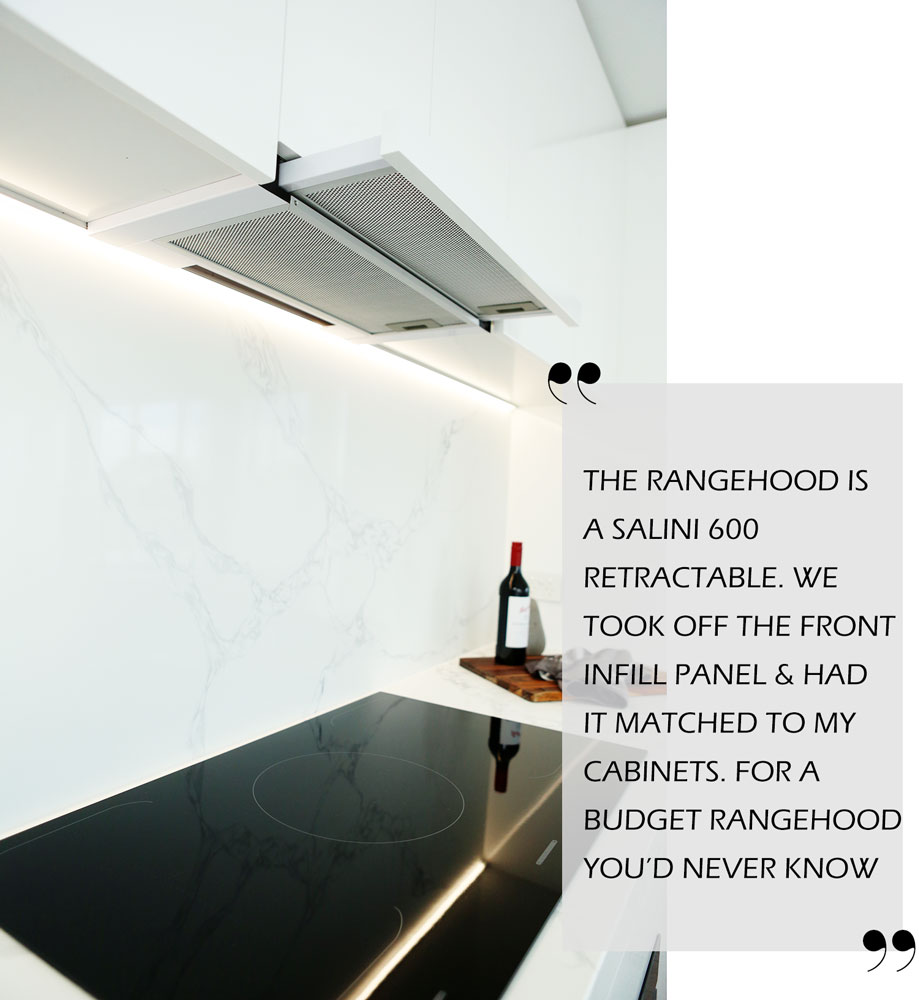 I went to induction for my cooktop, which initially I was a bit iffy about. The whole time I’ve ever been cooking I’ve used gas, so it took me a bit to invest in this type of cooktop, but I’ve got no complaints. Not only is it fantastic technology, it’s great for cooking with and it’s really easy to clean – which suits me just fine! 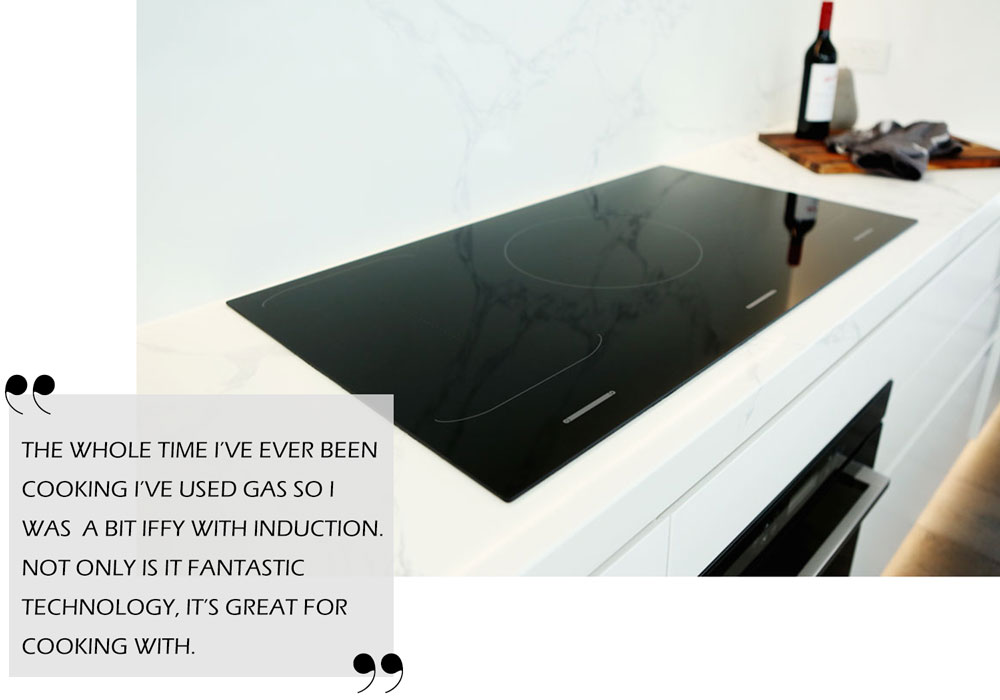 The oven I chose is a SALINI 600 Pyrolytic. It’s actually really, really easy to use and the best function of the whole oven is that it cleans itself and what more could you want!

When I was in the showroom, I thought that the double sink that I chose was a little bit too small, but I picked it on the relevance to the apartment being a 2 bedroom and I did want more bench space. Now that I have it, and I’ve used it, it’s the perfect size – so much bigger than I thought it would be. I love it. Paired with the pull-out mixer, honestly, it’s a perfect match.

Looking around and using the kitchen, which is a big difference to designing a kitchen, I really thought I nailed it. Everyone’s blown away that me in particular pulled it off – including myself – but I definitely get a good response about it.

The success comes from when my friends and family come around and love the space and want to be here. I get to entertain and have the people I love around me and what’s more important than that?

I didn’t renovate this place to sell. I renovated it to actually have my own space and live in. I want to be proud of the environment I come home to and have a clean, happy space.

I am looking to buy another place just to have some land at the moment and, potentially when I have a family, renovate that place and move in there. At present, I’m content in just living and using the place I put so much dedication into. 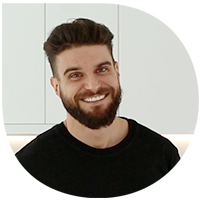 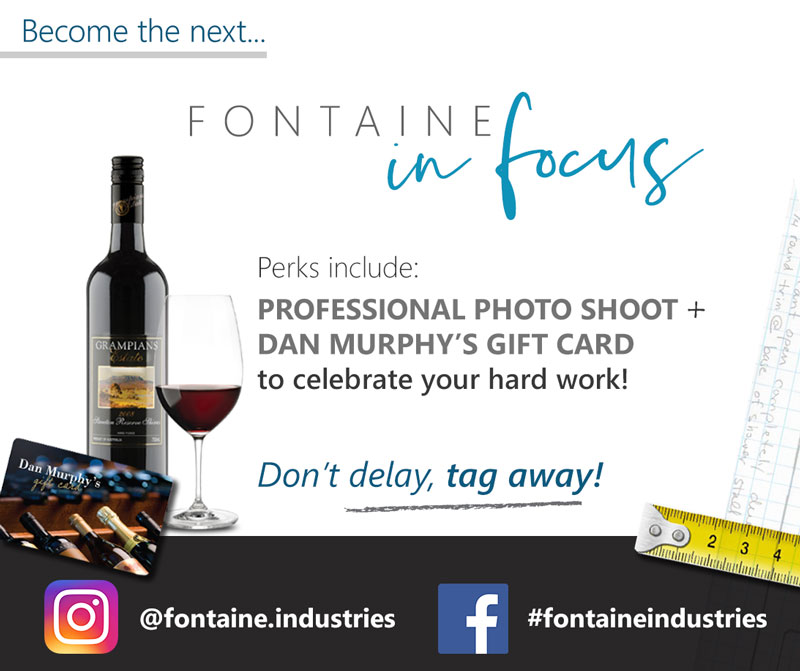 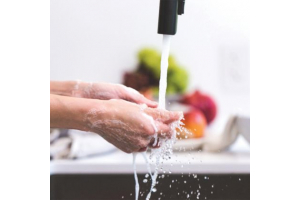 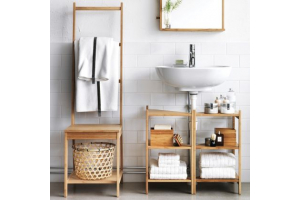 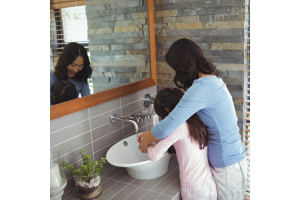 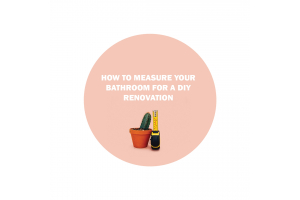 How To Measure Your Bathroom For A DIY Renovation 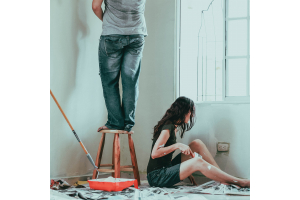